Akademy-es 2016 will be taking place during the next 15th to 17th of April. Here you can learn about the conference’s program.

Akademy-es is the annual meeting for KDE contributors and users in Spain, which is organized every year since 2006.

During the conference, there will be talks, workshops and other activities where we can: 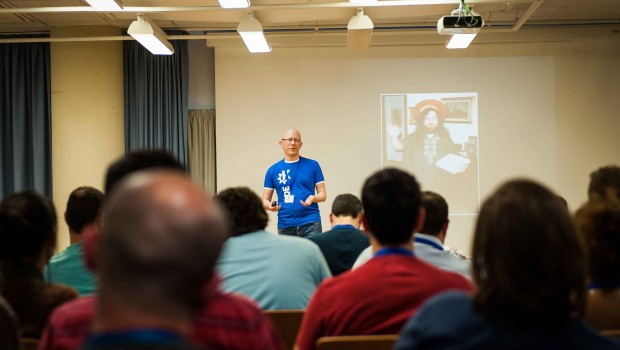 I joined KDE to hack. I wanted to create new thriving technologies for the world, to create tools, to learn, and, in general, to add some pragmatics into my perception of technology.

The one thing I didn’t really expect to do is all the rest.

I starting actively contributing to KDE in 2007 and I started contributing to both KDE Edu and KDevelop almost at the same time, I’ve talked largely about this aspect already so I won’t expand. I want to explain the rest.

My first Akademy, in Glasgow. felt spectacular to me, I made good friends and I remember having very deep experiences. With Albert, Anne-Marie, Rafael, Alexander, I loved the feeling that working together we could do great things and also that I could learn a lot over here. Those who know me know that despite being quite an introvert I tend to start talking a lot when I get engaged, and I remember talking a lot over there.

Foreign country, people, language, nothing mattered, the only important thing was to learn and to hack. I remember partying lots and hacking lots just as well over there. I’m explaining this because there needs to be an explanation, why someone who just wanted to hack ended up founding KDE Spain or joining the KDE eV board?

Later in 2007 we organized the Akademy-es in Zaragoza. Different setting, different people and different perspective. There you did’t talk to people who want to work with you, they wanted to be convinced about KDE, about Free Softwre. I enjoyed it, it was healthy to put in perspective everything I was doing. Thinking about how to motivate others helps a lot to redirect oneself, to keep with the feet on the ground.

Later on, we decided to start KDE Spain, which was basically the intention to keep doing that in the future. Reaching out to local people, those who you won’t find on our mailing lists, at least not before you get there. KDE Spain has been to the day one of the projects I’ve invested myself the most.

I joined the KDE eV late in 2008. I was by then convinced that without infrastructure all good to be done in the project is in vain. We’ve all had this feeling when you see another project offering something that you have had for years unnoticed. It requires work, many pieces coming together.

Community software development (or any development for that matter) is much more complex than one would want. It needs organization and expertise in crafts one wouldn’t think before. That is one of the main reasons to push for KDE to me: having people from different fields coming together to make wonderful things happen. (Community as a Service, CaaS. Have we coined that yet?)

Life is all about balance. From generic to specific, from big to flexible. Life artifices made it so that my city, Barcelona, has become a focus of the KDE development and we had to take advantage of the opportunity. This time we went full local, we started to gather many people knowledgeable about KDE around and instead of creating yet another KDE thing, we created a group concerning Free Software in Barcelona.

With the huge help of Martín, we’ve built an open group to meet and discuss about Free Software in a nice and relaxed setting. It was a piece I always missed in the puzzle. So KDE is getting older…

And from KDE Spain we don’t want to let the next 14th October to pass by without a proper birthday party.

That’s why we have put together 4 mini-events/birthday parties around the country to celebrate in A Coruña, Barcelona, Castelló and Málaga. We’ll have some talks and probably some dinner if people feels like going out a little :).

If you’re interested in coming to the event, check the schedule here: http://kde-espana.es/news.php#itemKDEcumple15aoshabrquecelebrarlo

If you’re interested in helping, don’t hesitate to ask me or anyone in KDE Spain! There’s plenty you can do, including organizing another in your city, we will provide some materials for you, we want you to be part of it as well!

And for the rest, whoever you are, don’t forget to spread the word! KDE is going to be 15 and needs your enthusiasm too, for the next joyful 15 years!

Hi!
As some of you might know in Spain many different languages are spoken and among the major goals of the KDE Spain association, we’re trying to push those to be properly available and usable in KDE.

Until some time ago, it was just possible to browse our website in Spanish, which wasn’t very coherent, that’s why we adapted the website for localization.

For the moment, besides Spanish, we just have Catalan and English which is a good start. 🙂

I hope you like it, cheers to anyone who helped! 🙂

PS: Of course it’s not like we speak that much English in Spain, it’s just in case you want to take a look…

New KDE Edu website and logo, the making of

I’m quite happy to see that we finally made it for the new KDE Edu design. From my point of view it’s quite hard to make all these changes from our community perspective. KDE has been built fundamentally around software developers and it’s not easy to get contributions other than that, I guess that’s mainly because I can write the type checker for KAlgebra but I really can’t work on a website design. It’s usually quite hard to get people from the community willing to put their love in projects like the KDE Edu website.

They say that there are always solutions, this time it came from Agustín Benito, who used his white wizard powers to get us in contact with a couple of designers coming from ASOLIF companies that wanted to contribute to free software somehow, and this was the way.

The experience went really well, I won’t say it was easy for me but I’d say it’s because it was my first time working like that and I didn’t know very much what to expect, but the thing is that people who worked with us are very good professionals (something that doesn’t happen always in our world as well, for good and bad) and I don’t think anyone can doubt of the quality of our result, like it or not. \o/ yay us!

I won’t say everything was perfect, probably the whole process took too much time and communication could have been better probably, but I think it’s a great start and I’m really looking forward in seeing this collaboration paradigm gaining adoption inside KDE, and why not, taking part in these projects.

And last but not least, thanks to the KDE-www guys who were really helpful, specially Ingo Malchow and Matthias Meßmer who were really supportive with the project and helped us make the best out of it. Also thanks to Alex Fiestas who joined us in the KDE Edu sprint and broke some of his own KDE collaboration rules to give us a hand doing some development on the website.

I’ve probably been talking lately too much about where I was going to spread my KDE love and talking too little about what I’ve been doing and what’s happening:

Akademy-es: Yes! we’re having the Akademy-es in Barcelona this year and I know you won’t miss it. Yay! Awesome. Well it takes some preparation, so it takes some time. I feel I’m quite lucky I could find a rather big team of local KDE enthusiasts, that way I don’t have to do it all by myself but truth is it’s time consuming and love consuming. By the way, if anybody wants to help, just poke me and remember to register if you want to come!

KDE Edu: We had our yearly meeting. In my opinion most of our group work was about getting the best out of GSoC and the rebranding. The GSoC results where out last week, I hope the best luck for all the GSoC student, as an ex-student I can remember the excitement of being accepted, so congrat’s to all of them :). About the rebranding, news will be coming soon :). On the KAlgebra side, the language has improved tons since 1 year ago, it’s quite hard to show that to the KAlgebra user I guess, but we’ll get there, for the moment rocs looks like it will be the next victim.

KDevelop: As some of you already know, I’m working on my final engineering project around KDevelop, doing some static analysis using our infrastructure. It’s still going forward but it’s keeping me to commit new features to KDevelop lately, I hope I’ll fix that soon, though… >:) I’ve got some crazy ideas to be put in place, since I don’t like to talk about something that’s not implemented, you’d better wait and see :). If anyone is interested in static analysis (on c++ for the moment) you can find me in irc/e-mail and we can talk about life and spring 🙂 oh and static analysis.

In the end, a lot of things are moving, I don’t have as much coding time as I’d like since there’s always something that sounds that if I don’t do it nobody will, probably I shouldn’t think like that… but oh well, I hope everyone will enjoy my KDE areas the way we all enjoy KDE.

Hugs for everyone! \o/

As some of you will know, we’re celebrating the yearly KDE Spanish event the next 20th to 22nd May in Barcelona. Since we don’t want to leave any of you behind, we’ve decided to extend the Call for Papers period for an extra week so that you can get your ideas ready in time. The CfP will close the 28th and the schedule will be ready by the 1st May.

Hope that will help to get all of you in :). And remember! If you’re planning to come, please register here: http://kde-espana.es/akademy-es2011/registro.php.

If you need lodging and you are not sure where to go, don’t hesitate to get in contact with us so that we can give you some hints!

See you in Barcelona!